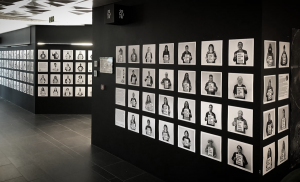 online campaign supporting the imprisoned WikiLeaks editor Julian Assange, who on behalf of Freedom of Information is risking a lifetime behind bars in the US. On July 26th 2019, the Art Collective, Sak’en, launched a physical version of the exhibition in three locations in Bergen, displaying photos of regular people and public figures, all holding signs in support for Press Freedom and Julian Assange. The exhibition also consisted of original artwork by several artists.

Within a short week the exhibition became a display of censorship in more ways than one:  One of the locations was Noways largest media hub– Media City Bergen . According to the building owner, Entra Eiendom, a number of complaints had been received about the exhibition be “too one sided” and the following email was sent to all tenants…

“Art has a function when it creates debate and disagreement, and it is the artist’s point of view and opinion expressed in art, not Compass Group or Entra’s. We have however decided that it is right to take the exhibit down this time. “

National organizations, and some of the media tenants on the other hand, made it clear that the removal was unacceptable:

“Unfortunately, a sign of the times is that ‘some reactions’ is sufficient to remove artistic expressions. But – having this happening in the bastion of Free Speech is beyond comprehension. Media companies should clearly and explicitly tell the house owners that this kind of censorship is completely unacceptable. The exhibition should be reinstalled immediately, and Entra should apologize” – Editor of BA

The Norwegian PEN, called it a serious attack on Freedom of Speech and a clear case of Censorship.

“The assembly of Norwegian Visual Artists react to what we consider as censorship of an art exhibition. The actions are an attack on the Freedom of Speech, which we cannot accept. We gather behind Norwegian PEN in this matter; The exhibition should be reinstalled according to the agreement with the artists, whoever demanded it removed must come forward to justify their claim, and the ones responsible for the removal must justify their actions. To remove artwork without an explanation is nothing but censorship.”  –  Chairman Ruben Steinum

One of the following nights, a new artwork emerged in Bergen. The painting depicted AFK’s own portrait photo from the exhibition, but with his face replaced by a Globe and the inscription ‘Censored’.