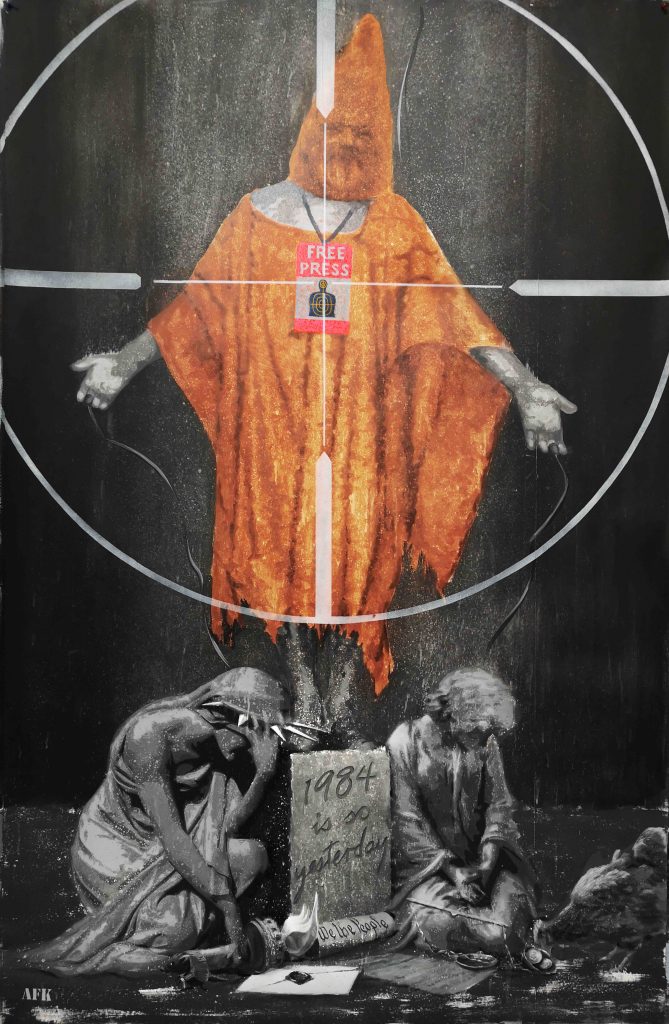 The Persecution of Assange

Assange – “The Persecution” by Terje Alnes

“The persecution – lest we forget …” – is street artist AFKs reaction to the arrest of Julian Assange.

So, he has done it again. On the same street corner as the famous Listhaug picture appeared in Easter last year, AFK, last night revealed the image he has called “The persecution – lest we forget …”. The hooded face belongs clearly to Julian Assange, founder of WikiLeaks, who was arrested in Ecuador’s embassy in London on April 11. Assange and WikiLeaks have exposed serious war crimes committed by the US in Afghanistan and Iraq, and several US politicians have openly talked about killing him. AFK has for many years been concerned about freedom of expression, mass surveillance and media double standards when it comes to coverage of political crimes committed by the United States and Western allies.

“If you tolerate this … who will be next?”

To nrk.no, AFK says that the image is an “attempt to illustrate what the persecution of  Assange is really about and what is at stake for all of us if we let the United States criminalize the reporting of human rights violations. “

Assange is dressed in a costume similar to that of the prisoners in the US-run torture prison, Abu Ghraib in Iraq. A press card with the inscription “Free Press” hangs around his neck and covers his chest. Julian Assange and the “Free Press” card are placed right in the firing line, framed by a crosshair of a telescopic sight. In the crosshairs, we read the text “If you tolerate this … who will be next?” Under Assange sits two figures with bowed heads. One of them is the American Statue of Liberty, while the other is Justitia or Lady Justice. Both are clearly burdened by shame. Between them is the inscription “1984 is so yesterday.”

The arrest of Assange has really been an eye-opener when it comes to the defense of press freedom. The liberal commentators have in large flocks proved to be servants of the power structures and have stabbed Julian Assange and WikiLeaks in the back. These liberal voices are nothing more than make-up on the ugly face of power. The arrest of Assange has served as makeup remover, and these “journalists” are revealed as part of the power apparatus. They have no will to stand up for the press freedom and freedom of expression. Reactions at the Holberg debate in 2017 revealed where these liberal voices in Norway really reside. In “The liberal commentators rise and fall”, Gisle Selnes has delivered a devastating and revealing judgment on these fake “journalists.”

The artwork was attempted stolen, stolen, and then returned.

At 9 o’clock, Easter Sunday the painting was removed by two people who claimed they were from the Cultural Heritage Office in Bergen, writes BergensAvisen. Cultural heritage authority Johanne E. Gillow has informed the newspaper that they were not involved. A few days later BA.no tracked down the two perpetrators and the damaged artwork was returned to the artist.

“It’s not ok that someone has stolen the work, I’m going to continue making art in public places. I wish one would discuss the content and not the vandalism and theft of the images. Two days after the painting was posted, and a ton of articles around the entire country later, I still experience a deafening silence in Norwegian media about the persecution of Assange and the threat this represents to freedom of press.” – AFK