STRONG MESSAGE: The most interesting thing is how AFK turns Listhaugs gun against herself, and puts her most prominent wording on the tip. To force his audience to relate to what free speech is, and whether it should be restricted and censored, writes Frode Bjerkestrand.

Political art was not dead afterall.

“Sylvi Listhaug (FRP) should defend the artist AFK’s right to paint her and hang the picture on a wall in Bergen. Freedom of expression is important for both of them.” Frode Bjerkestrand Culture Editor of BT

Street artist, AFK, has made a powerful political attack on former Justice Minister Sylvi Listhaug while he creates a debate about art, quality and and the margins for expression in Norway. The unfolding now is interesting, and I guess the artist is sitting at home and rejoicing a little today. He has got what he wanted. The mural «Making A Martyr” on the corner of Fosswinckels gate and Hans Holmboe street Nygårdshøyden managed to arouse considerable interest, before it was painted over Tuesday night.

Aesthetically, it was strong and engaging, because it swerved between two to three taboos at the same time.

Buildingowners: Have received bids on Making a Martyr.

AFK donned a prominent Norwegian politician stark naked and vulnerable. Humanly speaking, it is more humiliating than most of us would have liked. He presented her as crucified. It is a pose we usually see in considerably more reverent form, as the suffering of Jesus, in which he was punished for our large and small sins. A few years ago this would have been seen as blasphemy, and triggered a criminal response under a separate law.

Thus, it is not surprising that both Bishop Halvor Nordhaug and KrF leader Knut Arild Hareide found the artwork to be  outrageous. For them, tampering with Christ and the Cross will always be problematic. And the artwork is hardly conducive for a milder public debate, they may possibly be right. But then this is at the same time an acknowledgement of the role of art. It should not sneak around in public sphere for fear of offending anyone.

When Sylvi Listhaug resigned as Minister of Justice, she portrayed herself as a martyr for free speech. She said: “It has been a pure witch hunt, where the goal has been to silence freedom of expression. Freedom of expression is for me a very important value, which we will do everything to defend. “

What is most interesting is how AFK managed to turn Listhaug’s gun against herself, and load it with her most prominent wording (Min Kamp). In this way he forced the public to reflect on what freedom of expression is and whether or not it should be restricted or censored. Those who believed that the artwork should be removed, quickly ended up in a dilemma. If the artwork was removed out of moral outrage, is not that censorship? And what does that say about freedom of speech, of which Listhaug is a self-proclaimed champion of?

Somewhat unfortunate was the fact that AFK’s extreme use of symbolism (cross, naked skin) distracted from the subtle details. People should have looked a little closer, for here was the low-key, but important measures. The bolts through Listhaugs hands resembled the Red party logo. At her feet was a row microphones, as an indication that the media often act as uncritical platform for the most controversial politicians. On her right were the words “Yemen” and “Norwegian arms exports”, words that are closely related, and that describes the worst of Norwegian government hypocrisy. Norwegian state-owned enterprises sell weapons to Saudi Arabia that kill civilians in the Yemen civil war. Where is the outrage and protests against this double standard? 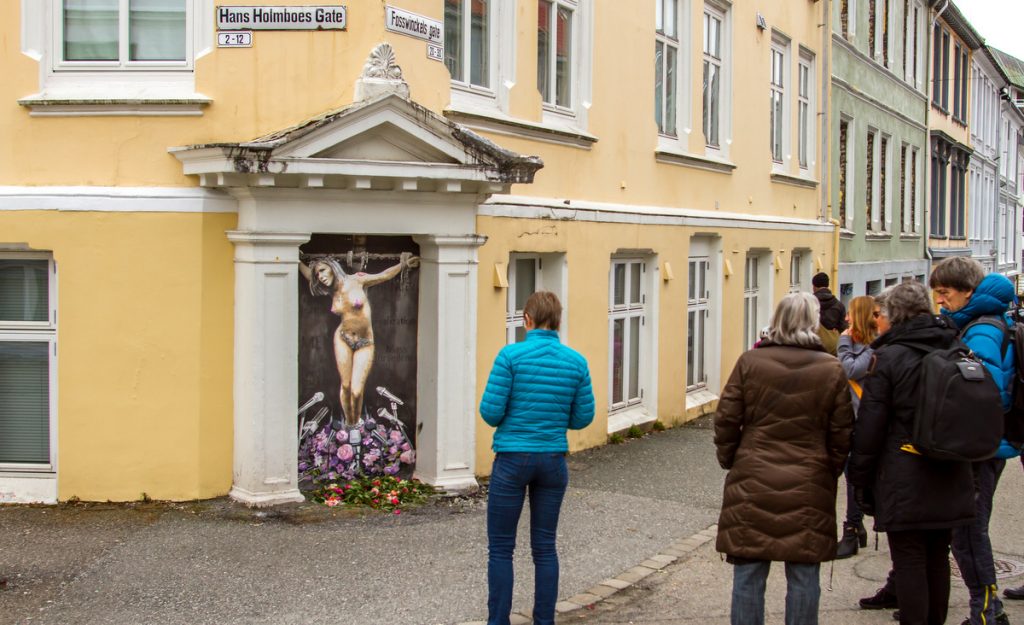 A nice side effect of AFK’s “Making a Martyr” is that he has kicked some life into the political art in this country. It currently stands at rest, and it’s been a while since politically charged art has motivated the nation to get off the couch. Norwegian art is surprisingly vague when it comes to tomorrow’s major political issues: Immigration, Integration, populism, nationalism, polarization and human dignity.

Here are other countries much more engaged. Not least, the United States, where President Donald Trump and his national populism has triggered a number of artist initiatives. Last year, grotesque Trump statues popped up in several US cities. The president was portrayed stark naked, and it was his microscopic penis that received most attention. The action was clearly intended to humiliate an exceptionally macho and pussy grabbing president, and it created a lot of discussion about art and the boundaries of expressive freedom.

Here in Norway, the artist Rolf Groven is best known for figurative, political satire. He painted Norwegian politicians without a hint of respect, portrayed in rather hypocritical situations. Among other, he made the painting “Victory Men” in 2002, where, among others, Carl I. Hagen (FRP), Kjell Magne Bondevik (KrF) and Valgerd Svarstad Haugland (KrF) pose with guns in hand in front of the World Trade Center ruins. The painting was a heavy criticism of Norway’s support for the US war on terror after September 11, 2001. Groven was quite alone in this genre, until street artists began using the city for political commentary and satire a couple of decades ago.

Much of the street art was quickly removed and instantly forgotten. Not surprisingly, it has happened to “Making a Martyr,” too. But AFK’s stunt in the middle of the holy feast, with politics, naked skin and ridicule of Christian symbols, will be remembered for a while. We need such reminders. Freedom of expression is important and precious. It may hurt, but it is nevertheless essential in keeping democracy open and engaging. This is arts most important role.

Facts of the matter:

20/03/18 Norway’s Minister of Justice, Sylvi Listhaug, stepped down after the majority of parliament expressed mistrust. The resignation came after statements that were seen as polarizing, offensive and sympathizing with the extreme right wing. She widely expressed to the media that the resignation was the result of a witch hunt and an attempt to silence her speech. The day after her resignation, she posted a photograph of herself on social media in a sea of ​​flowers that were sent to the justice department as declarations of support for the retired minister.

Barely two weeks later, on Easter Monday, “Making a Martyr” appeared on a wall in Bergen and created a nationwide reaction.

4. april 2018 – The artwork was vandalized and painted black.

10. april 2018 – Students sell Making a Martyr. Artist encourages them to donate to charity. 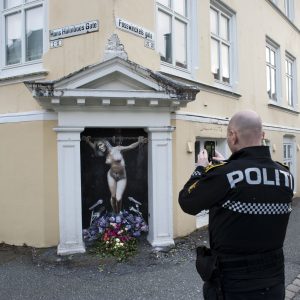 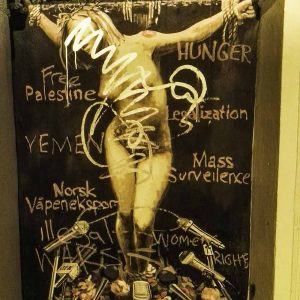 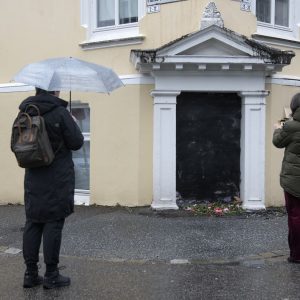 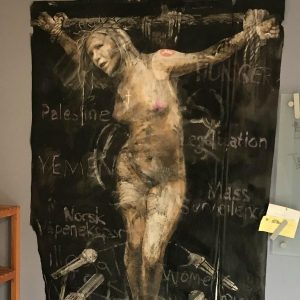 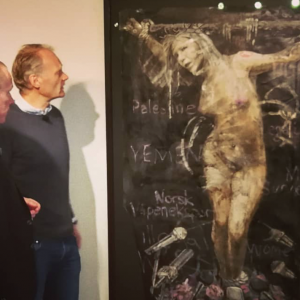