Although I am skeptic at heart, the persistent questions that have risen since 9/11, have reached all corners of the world, forcing us to take a closer look at the events of that day.

On the 12th anniversary of 9/11, a new national survey by the polling firm YouGov reveals that one in two Americans have doubts about the government’s account of 9/11, and after viewing video footage of World Trade Center Building 7’s collapse, 46% suspect that it was caused by a controlled demolition. Building 7, a 47-story skyscraper, collapsed into its own footprint late in the afternoon on 9/11.

The poll was sponsored by ReThink911, a global public awareness campaign launched on September 1. The campaign includes a 54-foot billboard in Times Square and a variety of transit and outdoor advertising in 11 other cities, all posing the question, “Did you know a third tower fell on 9/11?”

“The poll shows quite clearly what we already knew. Most people who see Building 7’s collapse have trouble believing that fires brought it down,” said Richard Gage, a member of the American Institute of Architects and founder of Architects & Engineers for 9/11 Truth, the campaign’s major sponsor. “It simply doesn’t look like a natural building collapse, and that’s because all the columns have been removed at once to allow it to come down symmetrically in free-fall. The evidence of controlled demolition is overwhelming. As more and more people learn about Building 7, public demand for a new investigation grows. People want the truth.”

A new forensic investigation into the collapse of the three World Trade Center towers on 9/11, published in Europhysics News – a highly respected European physics magazine – claims that “the evidence points overwhelmingly to the conclusion that all three buildings were destroyed by controlled demolition.”

Anatomy of a great deception. 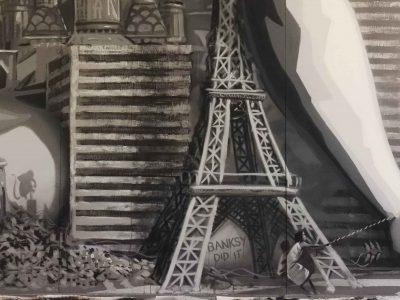 This composition includes elements of Banksy’s “Banana Bomb”, a stencil that raises the question, “Why would a monkey destroy something he supposedly loves?” It also plays with the idea that, Banksy bringing down the world trade centers is more believable than the official report. 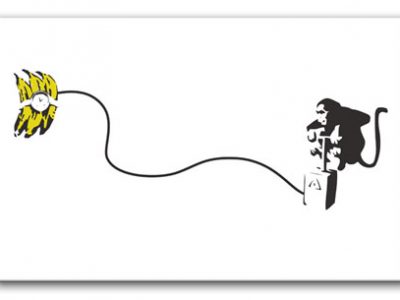